A Week On The Nile 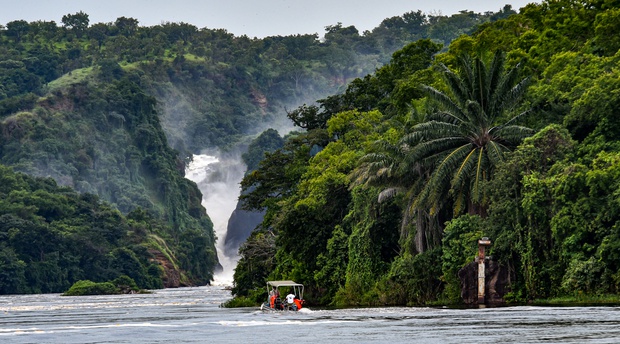 Spend a luxurious week exploring the river Nile starting from it’s tranquil source at Lake Victoria to Lake Albert in the north west of Uganda. Board a traditional style boat from the ‘Source of the Nile’ and explore the lakes inlets, islands and with stunning views of tropical rainforest on the lakeshore. Unwind at a tropical island paradise at an exclusive lodge set amongst the rapids, with stunning views of the surrounding vista. Then journey north following the course of the river Nile to where it crashes through impressive waterfalls, rapids and meanders through the golden savannah plains of Murchison Falls National Park. Seek out the ‘Big 5’ wildlife species with expert rangers, explore the river Nile further with water safaris to the base of the infamous Murchison Falls waterfall and the Victoria Nile delta where it empties into Lake Albert and unwind on the riverbanks at an exclusive lodge to the sounds of hippo pods calling across the waters.

Relax in Luxury at Wildwaters Lodge

Take some time to relax at your exclusive lodge nestled amongst tropical rainforest on a private island, mid-stream in the mighty river Nile. Enjoy lunch from under the thatched terrace with stunning views of the rivers rushing white water and unwind with a massage at the islands private spa. Take a dip and plunge into the lodge’s natural swimming pool carved out by the river over millennia from pink granite and relax in comfort by the rivers edge. Of course if you’re interested in birdlife there are a plethora of species found on the island which is in the heart of the Wildwaters Reserve that protects this untamed section of the river. With good chances of also spotting the resident otters and giant monitor lizards basking in the sun. However you spend your time here you will truly relax this intimate tropical island paradise.

A Cruise on the Mvule Boat

Explore the waters of the world’s largest tropical lake; Lake Victoria in comfort at a leisurely pace. You’ll be boarding the Mvule boat from the docks in Jinja where she was designed and handcrafted from Muvule and Makebu wood. You can then spend the day unwinding on the deck from shaded lounge chairs or sundeck, and enjoy the views of the lush forested shoreline, jagged cliffs and idyllic tropical islands as you meander over the lake. Your destination for the day is a secluded spot where the rainforest hangs over the waters edge, creating a truly alluring appeal. Here you can enjoy a leisurely lunch, relax, bird watch or even explore further from the onboard canoes! You will then cruise back along the lakeshore to reach the docks of Jinja town.

Depart from Jinja and cross the river Nile to the western banks to journey north passing through many villages, vast plains and roadside markets selling a variety of tropical fruits, which you may wish to sample. Drive on to pass Masindi town before entering the boundaries of Murchison Falls National Park. Journey on through Kaniyo Pabidi rainforest, watching out for baboons on the roadside and drive down an escarpment offering stunning views over the park. You will then wind your way through the African bush, watching out of game such as buffalo and Uganda kob to reach the ferry crossing dock in the heart of the park.

A Delta Cruise on The Nile & a Game Drive

Take the water on a boat cruise to the Victoria Nile delta where the river Nile empties into Lake Albert. As you meander downstream you’ll get the chance to spot elephants, giraffe, waterbuck and crocodiles on the river banks as well as hippo pods calling across the water until you reach the edge of Lake Albert. The delta is birders paradise and is particularly known as the habitat of the iconic shoebill, listed by the International Union for Conservation of Nature (IUCN) as ‘vulnerable’. On reaching the delta the experienced guides accompanying you will try to this rare prehistoric looking bird. You will also be able to seek well as many other bird species living in the delta including the saddle billed stork, goliath heron, African skimmer, African jacana, malachite kingfishers. After around 4 hours on the water you will make your way back upstream and disembark from your boat.

Explore the Buligi game tracks which crisscross the savannah between the branches of the Victoria and Albert Nile in the northern sector of the park. These game circuits offer the highest density of wildlife viewing of anywhere in the park. The landscape in the park is stunning offering views over the savannah, as wind your way through Acacia scrub and grasslands dotted with palm trees. You’ll be joined by a knowledgeable Uganda Wildlife Authority guide, to give your highest chance of tracking down the savannah predators. They will help you track down specific wildlife such as Rothschild giraffes, lions, elephants, herds of buffalo, Jackson’s hartebeest, bushbucks, Uganda kob, warthog, waterbuck and if you're lucky, you'll spot the elusive leopard. Towards the end of your game drive you’ll be able to stop off at the hippo pool on the Victoria Nile delta where you’ll see the hippos wallowing in the shallows and calling to each other across the water.

You will rise before the sun does to set off for a very special kind of safari. Your driver will take you onto the savannah plains of Murchison Falls National Park, where you will meet your hot air balloon pilot and the rest of the team. You will be given a safety briefing on your flight and instructions on the landing procedure. You will then watch ground team ready the hot air balloon for flight until it’s time for your to jump in the basket. You’ll then lift off and take to the skies over the savannah on a hot air balloon safari, to float over the plains as the sun breaks over the horizon. Depending on the prevailing winds you’ll view the river Nile and Lakes Albert, with the chance to spot herds of elephants, giraffes and buffalos with the backdrop of the Blue Mountains running along the horizon.

Enjoy some time relaxing at your exclusive riverside lodge, nestled on the banks of the river Nile. Refresh yourself by taking a dip in the swimming pool to escape the savannah heat or socialise at the thatched lodge lounge and dining area with 180° view of the river. Of course you can also unwind in privacy at your cottage, complete with shaded terrace, offering views of the river Nile flowing by, to the sounds of hippos pods calling across the water and array of birdlife singing along the riverbanks.

Embark on a water safari on the river Nile and cruise upstream to the base of Murchison Falls waterfall. Also known as Kabalega Falls, this is one of the most popular activities in the park and offers fantastic wildlife viewing opportunities. As you cruise up the river you will be able to view giant Nile crocodiles basking in the sun, hippo pods calling to each other across the water and a multitude of bird species living and nesting on the riverbanks. A variety of game species such as buffalo, waterbuck, elephants and Uganda kob can also be viewed on the riverbanks as they come down to the drink and cool off in the heat of the day. After three hours you will reach the base of the thundering falls where the White Nile surges through a 7 metre wide gap in the rock face, cutting through Fajao Gorge and falling 43 meters to continue its journey through the park.

A Wildlife Drive & a Sunset Cruise

Explore the plains of the northern sector of the park with a focus on the lesser known tracks near to Pakuba. With your Uganda Wildlife Authority ranger and guide you can take a detour from the typical game tracks to visit the old Pakuba Lodge, Idi Amin’s now derelict state lodge and private residence. These ruins are set in a prime location, offering beautiful views down to the river Nile and Blue Mountains in the distance. The building has long been reclaimed by the wild, now being heavily overgrown by vegetation and is a favourite haunt of the hyaena!

In the late afternoon make your way down to the docks to board your private boat to take a sunset cruise on the river Nile. Take a meandering route along the river keeping an eye out for various species of wildlife that will become more active as the heat of the day passes. If you’re lucky you will spot elephants and crocodiles along the river bank as well as hippo pods calling to each other over the tranquil water. As the sun begins to set it will light up the landscape giving it a beautiful glow, before you make landfall and head back to your lodge, arriving by dusk.

Visit Ziwa Rhino Sanctuary to seek out the rhinos living in the safety of this semi wild reserve. You’ll trek over the grassland and through the African bush on foot with a ranger to visit Uganda’s most endangered creature, the Southern White Rhino. Your ranger is very experienced and knowledgeable about the rhinos and will be able to identify each individual and tell you about their characteristics, as well as give you more information on the effort recover Uganda’s rhino population. This is the only place in Uganda where the rhino survives and breed with the hopes of one day being introduced to Murchison Falls National Park. All the proceeds from your visit to Ziwa Rhino Sanctuary go towards funding the rhino’s future.