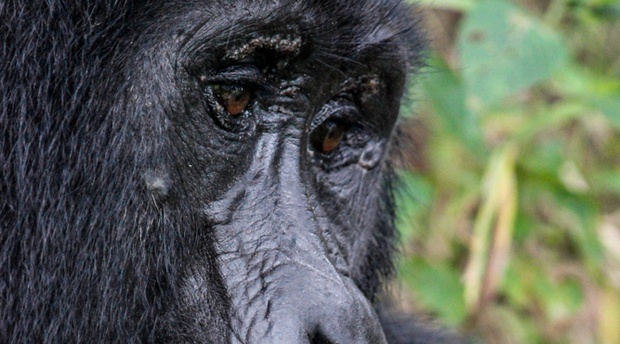 Discover the savannah and waters of Queen Elizabeth National Park from the comfort of your private 4x4 vehicle, complete with pop-top roof allowing you to truly experience the savannah with ease to seek out elephant herds, buffalo, hippo pods and the infamous tree-climbing lions. Venture to the highland rainforests to track the rare mountain gorillas in Bwindi Impenetrable National Park, a UNESCO world heritage site. Bwindi is a wildly diverse ancient rainforest and protects around half of the world's population of Mountain Gorillas. Trust us, you’ll never forget your experience of meeting our highly endangered relatives.

Embark on a water safari from the docks on the Mweya Peninsula to explore the Kazinga Channel. This channel connects Lakes Edward and George and flows through the heart of the park and is an excellent place to view a variety of savannah mammals and birds from. As you meander your way along the river banks you will have the chance to spot elephants, buffalo, warthogs and waterbuck as they come down to the water's edge to cool off in the heat of the day. The channel is also a prime location to view crocodiles, hippo pods and a plethora of bird species that live here. After a couple of hours on the water you’ll reach a fishing village at the end of the channel where the river enters Lake Edward and you’ll then make your return to the docks on the Mweya Peninsula.
Estimated excursion time: 2 hrs 30 mins

Explore the savannah of Kasenyi Plains on a game drive, set to stunning views of the Rwenzori Mountains or ‘Mountains of the Moon’ running along the skyline. These plains are home to a number of leks or breeding grounds for Uganda kobs, where they carry out their battles for mating rights. The vast herds of Uganda kobs found here graze the grass keeping it short allowing easy viewing of species such as elephants, buffalo, warthogs, bushbuck and waterbuck grazing amongst the euphorbia tree dotted-landscape. The large game herds make the area a prime location to track prides of lions, which hunt the herds found here. You’ll be joined by a Uganda Wildlife Authority ranger who are experts in tracking the lions and offer you the highest chances of tracking them down and are very knowledgeable about the savannah.
Estimated excursion time: 3 hrs

The Ishasha Plains cover the southern sector of Queen Elizabeth National Park and are particularly known for their iconic population of tree-climbing lions. Lions are only recorded to exhibit this behaviour in a few locations across Africa, believed to be a learned behaviour specific to a few prides. It’s been speculated this behaviour is to avoid the hottest part of the day to catch the cool breezes in the trees and to dodge the biting insects found in the grass below. On entering the savannah you will track through the African bush on a wildlife drive with a Uganda Wildlife Authority ranger to seek out these impressive cats. These rangers are based on the plains and track the lions daily giving you the best possible chance of finding the lions. You’ll be looking for them in the branches of huge fig trees, as they laze away in the shade, sheltered from the heat of the day. If you still have time after tracking the lions you can explore the various game circuits for other wildlife species found on savannah here including elephants, Uganda kob, buffalo and hyenas.
Estimated excursion time: 3 hrs

Awake early before the sun rises to watch it light up the savannah of Ishasha Plains. Dawn game drives usually give excellent photo opportunities due to the early morning light, the wildlife is more activities before the heat of the day sets in. These plains also allow you to take a game drive in relative seclusion compared to the rest of the park, due to limited number of lodges in the area. You will be joined by your expert Uganda Wildlife Authority guide who will help you search the plains for clans of hyena who are known residents of the Ishasha sector. If they are feeling shy then there are also good chances of seeing elephant herds, Uganda kob and the beautiful topi, an antelope commonly found here. Of course if you failed to find the tree-climbing lions so far here is another chance to seek out these top predators in the giant fig trees found on the plains.
Estimated excursion time: 3 hours

Experience Uganda’s greatest natural wonder, an intimate meeting with one of Bwindi Impenetrable National Park’s gorilla families! Bwindi Impenetrable National Park is an incredibly important conservation site as it protects around 320 mountain gorillas, roughly half of the population left in the wild. Dating back over 25,000 years, Bwindi is one of Uganda’s most biologically diverse and most ancient rainforests, with an amazing 400 species of plants present and 350 species of birds, including 23 Rift Valley endemic species recorded. The rangers accompanying you will be able to identify the local plants, birds and wildlife as well as the general ecosystem of Bwindi Impenetrable National Park as you trek.
This morning you will rise early and your driver / guide will escort you to the trailhead into the rainforest. Here you will receive an orientation on tracking the gorillas from the Uganda Wildlife Authority rangers who will then guide you through the dense forest. The trek length varies, depending on where the gorillas spent the night, ranging from thirty minutes to seven hours. Once you find these incredible creatures you will spend one hour with them. We think you’ll agree - to experience this unique family feed, socialise, nurse their young, patrol and display their prowess - is the most magical experience you can see in nature. After tracking you will make your way back to the edge of the rainforest where you’ll meet your driver guide.
Estimated excursion time: 2 - 8 hrs (including 1 hour viewing)

We an internal flight can also be included if you wish to reduce on the travel time. Please request details if this interests you.