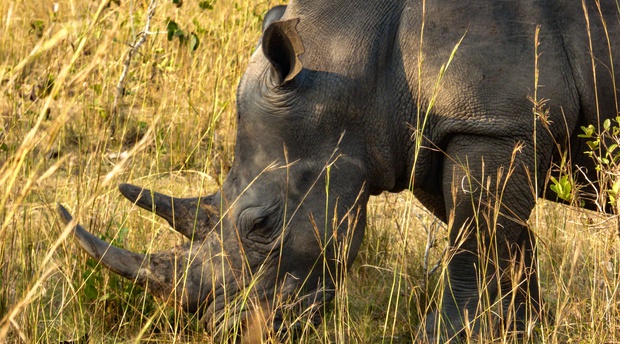 Seek out Uganda’s ‘Big 7’ wildlife species, the ultimate combination of our savannah wildlife and iconic primate species. Take a walk on the wild side to observe the countries only population of rhino and explore the savannah plains of Murchison Falls National Park to view herds of buffalo, elephant and giraffe alongside prides of lions and the solitary leopards. Take to the waters of the river Nile to view crocodiles and hippo pods, the crashing waterfall of Murchison Falls and the calm waters of the Victoria Nile delta to seek the Shoebill. Then trek through Budongo rainforest in the south of the park to meet a chimpanzee family. Finally you’ll journey to ancient rainforest of Bwindi Impenetrable National Park for a meeting with a rare mountain gorilla family, a truly memorable experience.

Today you will be tracking the chimps in Kaniyo-Pabidi part of the larger Budongo Forest reserve, located in the southern sector of Murchison Falls National Park. This is one of the largest natural rainforests still surviving in Uganda, which covers 825 square km in total. This is thanks to its protection as a royal hunting forest by the King of Bunyoro, until it was gazetted as a reserve in 1932 from when the National Forest Authority continues its protection. The forest is still home to a vast range of species such as the 280 butterflies varieties, 9 species of mammals and 465 species of plants, including the Mahogany trees which can grow up to 80 meters in height! Of course the forest is also home to nine species of primate, so watch out for the grey-cheeked mangabeys, red-tailed monkeys, blue monkeys, black and white colobus monkeys and olive baboons, on your trek through the rainforest. You will begin your tracking by meeting your ranger / guide for a briefing on tracking the chimpanzees in the rainforest at the forest trailhead. You will then enter the forest along a maintained network of paths. This rainforest is home to more than 600 chimps, of which a family of 80 individuals has been habituated to allow tourism visits, with an 80% successful tracking rate. Depending on where the chimps are, you should take around three hours to complete the tracking, allowing a 1 hour walk into and then out of the forest. Once you've found the group amongst the dense rainforest, spend an intimate hour with them, watching them play, eat, socialise and display their prowess. After spending your time observing the chimpanzee family you will make your way back out of the rainforest to meet your driver / guide.

A Game Drive, a Water Safari & a Waterfall Hike

Explore the Buligi game tracks which crisscross the savannah between the branches of the Victoria and Albert Nile in the northern sector of the park. These game circuits offer the highest density of wildlife viewing of anywhere in the park. The landscape in the park is stunning offering views over the savannah, as wind your way through Acacia scrub and grasslands dotted with palm trees. You’ll be joined by a knowledgeable Uganda Wildlife Authority guide, to give your highest chance of tracking down the savannah predators. They will help you track down specific wildlife such as Rothschild giraffes, lions, elephants, herds of buffalo, Jackson’s hartebeest, bushbucks, Uganda kob, warthog, waterbuck and if you're lucky, you'll spot the elusive leopard. Towards the end of your game drive you’ll be able to stop off at the hippo pool on the Victoria Nile delta where you’ll see the hippos wallowing in the shallows and calling to each other across the water.

Embark on a water safari on the river Nile and cruise upstream to the base of Murchison Falls waterfall. Also known as Kabalega Falls, this is one of the most popular activities in the park and offers fantastic wildlife viewing opportunities. As you cruise up the river you will be able to view giant Nile crocodiles basking in the sun, hippo pods calling to each other across the water and a multitude of bird species living and nesting on the riverbanks. A variety of game species such as buffalo, waterbuck, elephants and Uganda kob can also be viewed on the riverbanks as they come down to the drink and cool off in the heat of the day. After three hours you will reach the base of the thundering falls where the White Nile surges through a 7 metre wide gap in the rock face, cutting through Fajao Gorge and falling 43 meters to continue its journey through the park.

On reaching the base of Murchison Falls you’ll disembark from the boat and be guided up the trail to the top of the falls, a 45min hike. From the path you’ll get fantastic views from several vantage points over the Murchison Falls and twin seasonal waterfall, Uhuru Falls. On reaching the top you can marvel at the splash and rainbows of the Nile crashing through a seven-metre gap in the rock face, with cooling sheets of spray being given off by the falls.  You will meet your driver / guide at the top of the falls who will then drive you back downstream.

A Delta Cruise & a Game Drive to the Old Pakuba Lodge

Take the water on a boat cruise to the Victoria Nile delta where the river Nile empties into Lake Albert. As you meander downstream you’ll get the chance to spot elephants, giraffe, waterbuck and crocodiles on the river banks as well as hippo pods calling across the water until you reach the edge of Lake Albert. The delta is birders paradise and is particularly known as the habitat of the iconic shoebill, listed by the International Union for Conservation of Nature (IUCN) as ‘vulnerable’. On reaching the delta the experienced guides accompanying you will try to find this rare prehistoric looking bird. You will also be able to seek well as many other bird species living in the delta including the saddle billed stork, goliath heron, African skimmer, African jacana, malachite kingfishers. After around 4 hours on the water you will make your way back upstream and disembark from your boat.

Explore the plains of the northern sector of the park with a focus on the lesser known tracks near to Pakuba. With your Uganda Wildlife Authority ranger and guide you can take a detour from the typical game tracks to visit the old Pakuba Lodge, Idi Amin’s now derelict state lodge and private residence. These ruins are set in a prime location, offering beautiful views down to the river Nile and Blue Mountains in the distance. The building has long been reclaimed by the wild, now being heavily overgrown by vegetation and is a favourite haunt of the hyaena!

Visit Ziwa Rhino Sanctuary to seek out the rhinos living in the safety of this semi wild reserve. You’ll trek over the grassland and through the African bush on foot with a ranger to visit Uganda’s most endangered creature, the Southern White Rhino. Your ranger is very experienced and knowledgeable about the rhinos and will be able to identify each individual and tell you about their characteristics, as well as give you more information on the effort recover Uganda’s rhino population. This is the only place in Uganda where the rhino survives and breed with the hopes of one day being introduced to Murchison Falls National Park. All the proceeds from your visit to Ziwa Rhino Sanctuary go towards funding the rhino’s future.

Depart from the hustle and bustle of Kampala to drive west passing through vast swamps filled with swaying papyrus throngs and fishermen selling their freshly caught fish on the roadside. Continue your journey by passing the edge of Lake Mburo National Park, watching out for zebras as you drive and of course the herds Ankole cattle with their impressive horns! You will then journey into the hills of the Kigezi highlands, passing through Echuya rainforest to reach Kisoro town in the shadow of the Virunga volcanoes. It’s then a short drive out of town to reach the shores of Lake Mutanda, an idyllic highland lake with a stunning volcano panorama.

This morning you will rise early and your driver / guide will escort you to the trailhead into the rainforest. Here you will receive an orientation on tracking the gorillas from the Uganda Wildlife Authority rangers who will then guide you through the dense forest. The trek length varies, depending on where the gorillas spent the night, ranging from thirty minutes to seven hours. Once you find these incredible creatures you will spend one hour with them. We think you’ll agree - to experience this unique family feed, socialise, nurse their young, patrol and display their prowess - is the most magical experience you can see in nature. After tracking you will make your way back to the edge of the rainforest where you’ll meet your driver guide.

Depart from the shores of Lake Mutanda and follow the track along the edge of the lake to reach Kisoro town in the shadow of the Virunga volcanoes. Then wind your way through the mountains, Echuya rainforest and enjoy the stunning views of the Kigezi highlands. Continue your journey east back onto the rolling plains leading to Lake Victoria, where you’ll pass Lake Mburo National Park (watch out for zebras on the roadside!) and markets selling a variety of tropical fruits. Finally drive through the extensive papyrus filled swamps to reach Entebbe town on the shores of Lake Victoria.