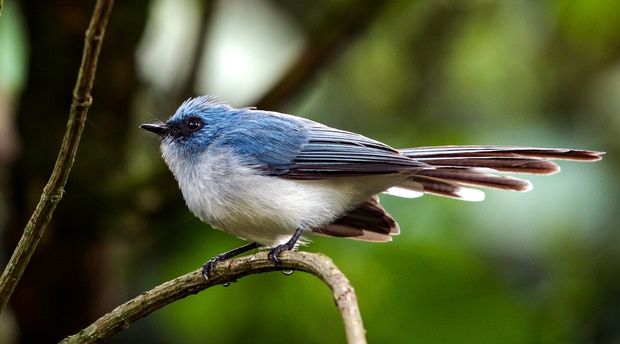 On completing immigration and collecting your luggage you will be met by your driver / guide at arrivals in Entebbe International Airport. They will help you with your bags and they will drive you the short distance across Entebbe town to reach the Nakiwogo-Buwaya ferry crossing. Here you will take to the water on a vehicle and passenger ferry and make the short trip across the inlet on Lake Victoria and then continue to drive a short distance to reach Nkima Forest Lodge.

This option is only available if the flight lands before 14:00.

Meet your guide at the jetty on the shores of Mabamba Swamp, a protected RAMSAR site. Take to the water in a motorised canoe to spot a variety of wading species. As you glide through the water you will be struck by the lush green vegetation, dotted with bright purple water lilies and feathered papyrus flowers swaying over your head. You will spend several hours exploring the swamp with your main goal to seek out the infamous Shoebill, a prehistoric looking bird. Reaching 140cm tall they spend their time wading through the swamp fishing in a very slow manner, making them almost look like statues. While in the swamp you will be able to spot a variety of other bird species such as the Saddle-billed Stork, Papyrus Gonolek, Lesser Jacana, Purple Swamphen.

You will take a walk along the trails through Mabira Forest which covering 300 square kilometers, making it the largest tropical rainforest remaining in central Uganda. The rainforest is valued for its high diversity of species with 310 species of trees recorded, 315 bird species and various monkeys such as grey-cheeked mangabeys and red tailed monkeys. As you trek along the forest trails you will be seeking out bird species such as the Nahan’s Francolin, Tit Hylia, Shining-blue Kingfisher, Forest Robin, Green-tailed Bristlebill and Forest Wood-hoopoe which you can spot as you wander the forest paths at your own pace. Your bird guide is an expert on the forest and will be able to explain in detail about the forests diversity, key species found here and the ongoing work to preserve it.

Take a short break from your journey by stopping off at this lesser-known birders hot-spot to stretch your legs with a short walk around Kakooge Swamp. The small swamp is home to a diverse group of birds so if you’re lucky, you’ll be able to tick some more species off your list!

The Royal Mile of Budongo Forest

Explore the Royal Mile, considered to be one of the top birding sites anywhere in Uganda.  You will be able to follow a flat 2.5km dirt road through the forest giving you excellent access into the forest and the chance to spot a variety of bird species such as the Dwarf Kingfisher, Chocolate-backed Kingfisher, Chestnut-capped Flycatcher and Uganda Woodland Warbler. Of course you will also get the chance to seek out the Yellow-footed Flycatcher amongst the trees. This is an endemic species to Budongo forest, making it the only place to spot this bird in East Africa! The forest is also still home to a vast range of species such as the 280 butterflies varieties, 9 species of primates and 465 species of plants, including the Mahogany trees which can grow up to 80 meters in height. You will have the day to explore the Royal Mile at your leisure and enjoy this fantastic birding hotspot!

Depart from Masindi town to begin your journey through the stunning scenery of western Uganda. It’s a long drive but with beautiful scenery of vast tea fields, mountains, forests and farmland as you drive through the rural countryside. You will be able to stop off along the way to stretch your legs and on completing most of the journey you will arrive at Kyenjojo trading centre. From here you will rejoin the main paved road and drive west to reach Fort Portal town in the foothills of the Rwenzori Mountains, its then just a short drive to reach the rainforest of Kibale National Park.

Rise at 05:00 to meet your team at the Uganda Wildlife Authority headquarters for your chance to spot the rare Green-breasted Pitta! After a briefing you will walk into the rainforest, listening for the Green-breasted Pitta displaying in the early morning light. With your expert guides and their local knowledge this gives you the highest chance to spot this rare species and of course get the chance to seek out other birds such as the Joyful Greenbul, Chestnut Wattle-eye and Blue-shouldered Robin-Chat amongst the dawn chorus.

Meet with your Uganda Wildlife Authority tracking team for a briefing on tracking the chimpanzees in the rainforest. Kibale National Park is one of East Africa’s premier destinations to chimp track with a 95% successful tracking rate. This ancient rainforest is also home to one of the highest concentrations and diversities of primates found anywhere on the continent. The tracking team will be escorting you throughout your time in the rainforest and will be able to identify and give more information on the species found here including the 325 species of birdlife, 250 tree species and over 80 species of mammals as you trek. Groups of chimps live in communities containing between 10 and 100 members and once you’ve found your group, amongst the dense rainforest you will spend one hour with them. You will be able to observe their natural behaviour in the rainforest as they play, eat, socialise and display their prowess. You will then make the return hike along the rainforest paths to meet your driver / guide.

Explore Magombe Swamp at the Bigodi Wetland Sanctuary, with your bird guide and a local guide who’ll accompany you round this protected RAMSAR site. The path meanders along the edge of the swamp and along a raised boardwalk through dense clusters of papyrus, taking a couple of hours to complete. This community run project offers the chance spot up to 138 bird species including the Great Blue Turaco, Joyful Greenbul, White-spotted Flufftail, Brown Illadopsis, Papyrus Gonolek and Yellow-billed Barbet. The swamp is also home to a vast array of butterflies and perhaps what the swamp is best known for; its population of monkeys. As you ramble around the swamp your guide will be able to identify the local flora and fauna as well as the seven species of monkey found here including red colobus, grey-cheeked mangabey, L’Hoest, vervet, black and white colobus, blue monkeys and baboons.

Venture into the lowland tropical rainforest of Semuliki National Park with your birding guide. After a briefing you will walk 2 km to the trailhead, the path then winds for 12 km (each way) through the rainforest to reach the Semuliki River. Most groups will do a shorter route of either a 20 km walk to the grasslands or 16 km route. The distance is adjustable so your route can be tailored depending on how far you wish to walk and what you wish to see. The rainforest is a prime destination for birding with the chance to spot Long-tailed Hawk, African Piculet, Piping Hornbill, Red-billed Dwarf Hornbill and Crested Malimbe amongst others. This is also a great primate habitat with several for you to spot such as the Dent’s Monkey, grey-cheeked Mangabey, De Brazza’s Monkey and Black & White Colobus Monkey. You will of course be accompanied by your bird guide and ranger throughout your time in the rainforest who will be happy to answer all of your questions.

Take a walk with your guide and ranger along the forest trails of Sebitoli keeping your eyes peeled for primates and birds. This wildlife reserve is on the border of Kibale National Park so you’ll weave along paths and walk beside the Mpanga River looking for forest and savannah birds. Your birding guide will help you spot key species such as the Dusky Tit, Tullberg’s Woodpecker and Grey throated Barbet. Sebitoli Wildlife Reserve offers the chance to encounter several types of primate including red colobus, black-and-white colobus, blue monkey and vervet monkey which you’ll spot scampering through the trees.