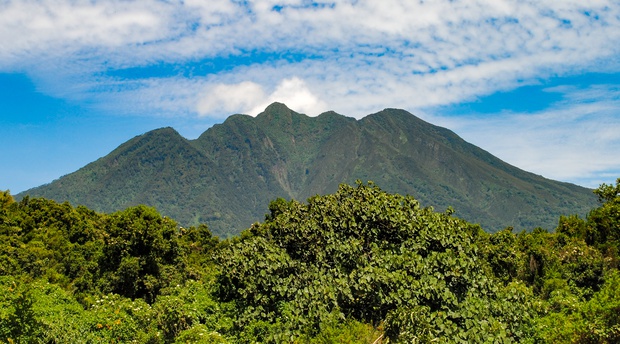 Explore the Virunga Volcano massif in the south western corner of Uganda. Spend a day tracking an endemic golden monkey troop through the rainforest of Mgahinga Gorilla National Park, hike to the summit of one of the three iconic conical volcanoes either Mt Gahinga, Mt Muhavura or Mt Sabyinyo and meet the friendly giants living on the slopes of the this transnational park, the rare mountain gorillas! Your lodge has been chosen for its interesting history and proximity to the mountain gorillas.

Spend a day on Mount Sabyinyo (locally known as ‘old mans teeth on account of its shape) with an endangered troop of old world monkeys. Until recently not much was known about the golden monkeys so a team of scientists set about to learn more on the slopes of the Virunga volcanoes. The activity can last for up to six hours as you walk and watch with the habituation team who are preparing these monkeys to be comfortable with humans. These monkeys can travel in groups of up to 60 and live in highland forest. You can sit and observe the monkeys for up to four hours whilst they socialize, eat, nurse and play and then you will leave them to climb up into the bamboo and make their beds for the night.

[today you can choose from one of the three hikes below]

Option 1: Day hike on Mount Muhavura, Mgahinga Gorilla National Park
You’ll rise early for today's hike up Mount Muhavura which translates as ‘the guide’. The trek typically takes 9 hours to ascend to the peak at 4127m and return back down the volcano. It’s a challenging trek, so you’ll need to be quite fit to reach your destination! If you don’t reach the summit by 2pm then you’ll be required to turn around and start the descent to allow your return before dusk. Mount Muhavura is likely the toughest climb but, weather permitting, it will reward you with panoramic vistas of the Uganda’s Virunga volcanoes, Lake Edward, Bwindi Impenetrable Forest and the snow-capped peaks of the Rwenzori Mountains far in the distance! Along the way you’ll find a sharp distinction in three types of vegetation: first you’ll meet cultivated forest, second into wild moss-covered trees, and finally a variety of old world low shrub that can only be created by black the volcanic rock. On reaching the summit you’ll enjoy a very well deserved picnic lunch beside a small yet beautifully preserved black and glassy crater-lake, 39m in diameter. Get your cameras poised for that gap in the clouds! You’ll then descend slowly and carefully to reach the base of the volcano at around dusk.

Option 2: Day hike on Mount Sabinyo, Mgahinga Gorilla National Park
Today you will hike to the summit of Mount Sabinyo, which means ‘old mans teeth’ due to the jagged peaks topping the volcano at 3669m. The hike typically takes around 8 hours to complete the 14km route to the peak and back. You begin your hike by trekking through grasslands and the bamboo zone. Then enter the rainforest covering the volcanoes slopes where climb becomes steeper trek through cloudy forests to catch your first peek at the summit opening up ahead of you. You will then to climb steep ladders from which you see the stark change in vegetation as you hike over moss, under old man’s beard and beside giant lobelia before reaching the summit. The summit of Mount Sabinyo marks the intersection of the borders of the Democratic Republic of the Congo, Rwanda, and Uganda. So get your camera’s ready for that shot of yourself straddling three countries, on the top of an extinct volcano, it’s more than worth the effort! After a rest at the top of the volcano you will make the steep descent down the slopes to complete your hike before dusk.

Hike to the summit of Mount Gahinga, which name translates as ‘the small pile of stones’. This name comes from the small piles of rock piled up when clearing the surrounding farmland from volcano debris, which you’ll pass on your hike. Mount Gahinga is classed as a dormant volcano and is one of the eight volcanoes that make up the Virunga Massif mountain chain. The hike to the summit and back typically takes around 6 hours to complete the 15km trail, with some time spent at the lush green summit at 3474m. The first part of the hike passes through the bamboo zone before you start a steeper climb on the slopes of the volcano. You should reach the summit, with the clouds sweeping around you in time for a well-deserved picnic lunch. You will rest besides the luminous lush green swamps and moors where plants such as alchemilla, senecio and lobelia thrive at the summit. Amongst the many lava tubes you’ll find on Mount Gahinga is the Garama Cave which your guides can take you to and explain the cultural significance amongst the Batwa people. You will then complete your hike down the volcano and exit the park.

Experience Uganda’s greatest natural wonder, an intimate meeting the Nyakagezi gorilla family, the only habituated group of gorillas in Mgahinga Gorilla NP. This is Uganda’s smallest national park, which protects the Ugandan section of the Virunga mountain range including the volcanic slopes of Mount Muhavura, Mount Gahinga and Mount Sabyinyo. The park is part of a wider protection over the Virunga volcano range as it also connects as transnational park with Virunga NP in the D.R. Congo and Parc National des Volcans in Rwanda. The park is incredibly diverse and an important conservation area. The rangers accompanying will be able to identify for you the local plants, birds and wildlife as well as the general ecosystem of Mgahinga Gorillas NP as you trek.
From the trailhead into Mgahinga Gorilla National Park you will receive an orientation on tracking the gorillas from the Uganda Wildlife Authority rangers who will then guide you through the dense forest. The trek length varies, depending on where the gorillas spent the night, ranging from thirty minutes to seven hours. Once you find these incredible creatures you will spend one hour with them. We think you’ll agree - to experience this unique family feed, socialise, nurse their young, patrol and display their prowess - is the most magical experience you can see in nature. After tracking you will make your way back to the edge of the rainforest where you’ll meet your driver guide.